The Indoor G-Tennis Tournament 2019 was again a great success !!

Saturday 2 February the tennis courts of Tennisclub Bastion Baselaar in Rosmalen were fully operational again. 20 G-tennis players and 20 buddys fought or that their lives depended on it. They won and lost, but there was a lot of laughter.

Given that as a player you are part of a team, it was possible that you as a player might have won all the matches but ended up as a team in 4th place, but it could also be that if you had just not won all the matches, you could still be on the team the 1st place could end. For example, there were only winners below the line !! And it was winners. The tournament started after a hefty warm-up where all players of the tournament were allowed to do different exercises. It started with 2 laps around the lanes and then heels-buttocks, frog jumps and various other exercises.

In addition to warming up the body, the Disco Quiz also boosted the mind. This is to make the team even stronger.

After the quiz the sport was blown. 3 matches of 25 minutes !! The matches were played around 17:00 and we were allowed to count the points. The players were allowed to recover from the fights and were able to enjoy a delicious Chinese rice table. Because of all that sports, the players and spectators had gotten incredibly hungry.

All members of the tennis clubs where we can collect tennis balls, thank you very much for the tennis balls !! Because without the collaborations with the clubs and the volunteers at the clubs, such a nice tournament would not have been possible, so go ahead and hand in the old tennis balls! Of course also a thumbs up for Floortje Voets from Flovo tennis. Because it is an entire organization to put together fun and sporting parties. 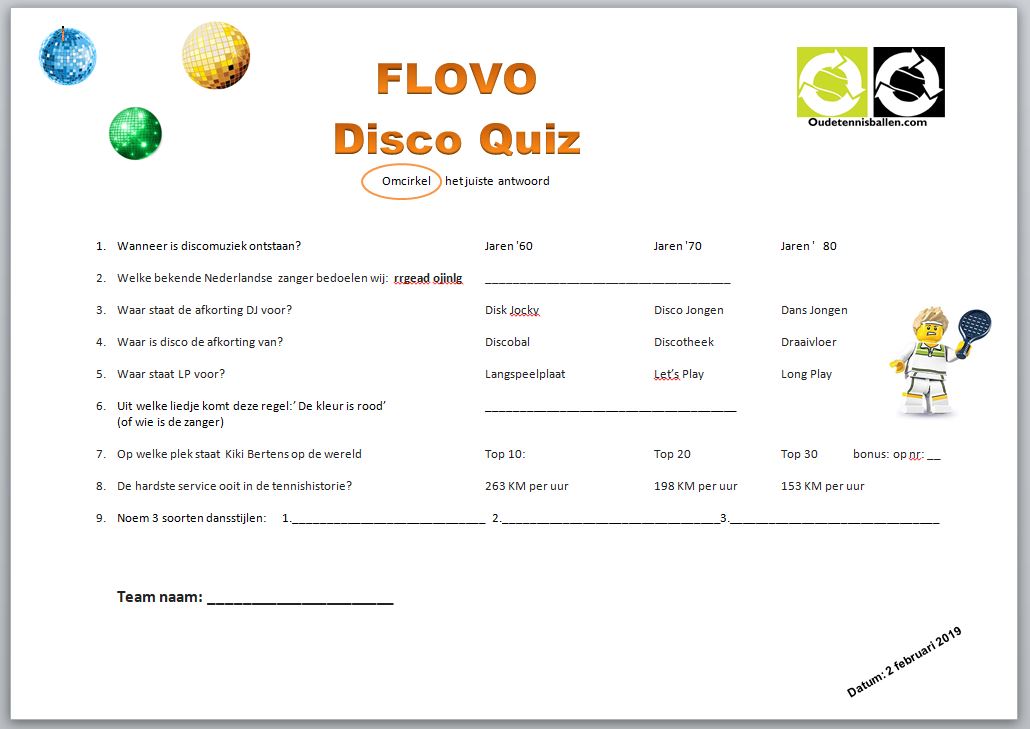 NOTE: The photos have been adjusted for privacy reasons.